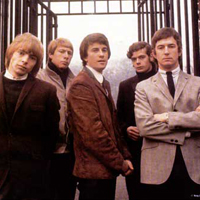 The Yardbirds were formed in the early 1960s, the first official Yardbirds show being at Eel Pie Island when we played as the support band for Cyril Davis. When we had finished playing Cyril asked Keith Relf what was the name of the band and Keith said The Yardbirds, and this was the first time I had ever heard the name. Keith had written down a few ideas for names in a notebook, The Yardbirds being one of them. The original term ‘Yardbirds’ refers to people that lived from day to day travelling around America on the old cargo steam trains and lived in the rail yards.

Paul Samwell Smith (the bass player and later producer) was at the same school as me, Hampton Grammer in Middlesex (SW London). At school we played in a “rock band” playing mainly old 50s rock and roll songs such as songs by the Everley Brothers, Buddy Holly and Johnny Cash.  About two years after leaving school I met up with Paul and he played me a recording of Jimmy Reed “Live at the Carnegie Hall”. I was very excited when I heard it and decided I would like to play this sort of music. To me this type of music was very evocative, similar to the earlier rock and roll but with a different dimension of emotion in it. I was working in a stockbrokers office at the time but knew that I really wanted to play music even if it was just for a hobby. 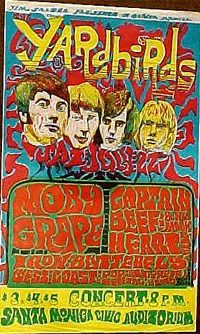 Quite near where Paul and I lived there was a pub where local musicians and artists would hang out and Paul had met a singer/harmonica player called Keith Relf and they had formed a blues band called The Metropolis Blues Quartet. I had met Chris Dreja and Top Topham (who were at the same Art School in Kingston as Keith) and we had also formed a band, which we eventually amalgamated with Keith and Paul. We played our version of R&B songs around London. Top was a very good art student and he was younger than the rest of us and due to our schedule of playing late night clubs he wasn’t able to study as much as his parents wanted him to, and he was  influenced to leave by his family.

Another musician who was at Kingston Art School was Eric Clapton whom Keith knew and persuaded him to come to audition to replace Top on lead guitar. And then with this line-up we took up the Rolling Stones residency at the Crawdaddy Club in 1963 in Richmond, Surrey, a club managed by Georgio Gomelsky who later became our manager. It was an exciting time for me.  I would come directly from the stockbrokers’ office in the city to the pub or club where we were playing that night, take off my “pin-striped suit” and put on my mod gear !! I still wore specs and during the show they would steam up because of all the heat generated by the atmosphere and the packed in audiences!! I would buy various blues recordings, jazz and classical too, not just to study the drumming, but because I enjoyed listening to lots of different types of music.

I still lived at home and when I got in after a show I had to play my records very quietly on my Dansette player – so as not to wake up my mother. She wasn’t all together happy with this set up in the beginning and wanted me to remain in my “safe and responsible” job in the city and when I eventually left to become a full-time musician it wasn’t easy to convince her – but I did it anyway!! 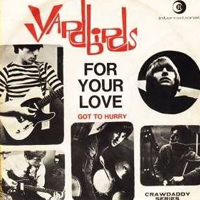 We gradually built up a following playing the clubs around London and playing our versions of old R&B songs. Georgio signed us up to EMI records and we recorded various songs in the studio trying to have the “hit” we needed to raise our profile. We got our break when we played at the Beatles Christmas Show in 1964 in Hammersmith Odeon in London. A publisher was in the audience and thought that a good song for us would be “For Your Love”, newly written by Graham Gouldman. He presented a demo record to Georgio and we went into the studio and did a version using harpsichord, bongos and stand-up bass, Paul having had the idea to do this arrangement. Eric became quite unhappy in the band due to the musical direction and various personal differences and left just before “For Your Love” came out.